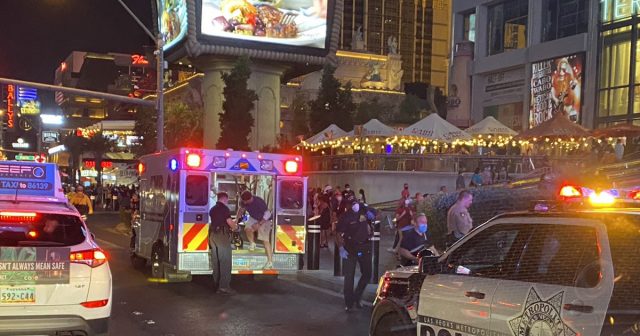 It was another weekend of absolute chaos on the Las Vegas strip with dozens of fights, attacks, and yet another shooting – this time in front of the Planet Hollywood.

Things started getting tense on Thursday in the lead up to the weekend, with multiple attacks being reported throughout the downtown area. It’s hard to get an accurate accounting of what happens anywhere in this city since our local media refuses to cover the problem.

Here is one of the riots that broke out on Fremont Street.

It’s incredibly sad how fast Las Vegas has been destroyed… none of this will end until they allow conventions to reopen and ban the lowlifes — instant lifetime ban if your involved in violence! Feels like you are rolling the dice with your life even being on the strip! pic.twitter.com/3SYfnhGH2J

Just another night of California’s idiots running wild in our Casinos… pic.twitter.com/xt19myzIyd

Then we had Democrat activists pulling people out of thier vehicles and beating them in the middle of the Las Vegas Strip.

While locals had to worry about their safety, and small business owners had to wonder if this was the night they were shut down by the City of Las Vegas’ Mask police, gangster rappers and felons with long criminal histories were escorted through backdoors at Casinos – without having to worry about those pesky metal detectors and body scans — and allowed to turn suites and closed down clubs into mask-free nightclubs…

As Strip casinos ban locals from entering & subject you to body scans, pretending it’s to curb the violence, convicted felon gangster rappers are allowed to throw mask-less parties & are escorted in through back doors! Guess when your married to Biden’s buddy Cardi B… pic.twitter.com/N214UsZ0wi

Democrats operative Cardi B threw multiple parties throughout the city, all mask-less and all without following any of King Sisolak’s mandates.

And then we got the latest shooting…

And the weekend was capped off with yet the latest in a long string of shootings on the Las Vegas Strip. This weekends shooting happened right in front of the newly reopened Planet Hollywoord Hotel and Casino.

The aftermath of yesterday’s shooting at Planet Hollywood on the strip… imagine being a “normal” tourist and having to deal with this/run for your life! Would you come back to Las Vegas for more of Sisolak’s shit show? https://t.co/bkddHgOoal pic.twitter.com/8bwq8L0cGu

Of course, this is only a small look at what really happened this weekend in Las Vegas. There were multiple other incidents that took place, including a lockdown at the Cosmopolitan that no one is talking about and fights in a number of casinos that our local media refuses to acknowledge.

It’s hard to get an accurate view of what really happened down there, and since we don’t have the huge budgets or multiple journalists like the 4 Television Stations and Two Newspapers who sit on their ass and do nothing, it’s hard to capture everything. In fact, in the hour we were covering the shooting at Planet Hollywood, we witnessed at least 3 more large events that have gone unreported.

Shit Show 2020 continues… get out while you can! pic.twitter.com/Nd1BeaUVET

The Westin was completly sealed off with crime tape, did you see this covered by our local media?

Shit show in front of Westin on Flamingo… avoid the area!!! Thanks @GovSisolak pic.twitter.com/tpc21dAepm

And then we had another incident in front of the Wynn, details have not been released on what happened on the bus!

Another “incident” on a bus in front of Wynn pic.twitter.com/8kykb9Lsvr