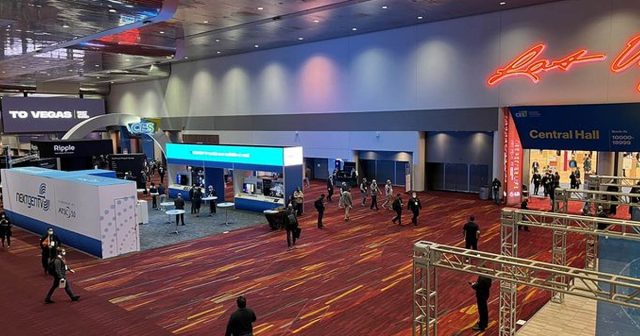 Thanks to Governor Steve Sisolak and Gary Shapiro, president and CEO of the Consumer Technology Association (CTA), this year’s CES is a complete bust, losing hundreds of millions of dollars of non-gaming revenue for Las Vegas businesses.

Early estimates are that over half of the exhibitors pulled out and over 70% of attendees did not show this year.

We usually try to use our own photos whenever we cover a story like this, but since we have been banned from attending CES for the first time in over 15 years, because we wouldn’t be forced into taking an experimental gene therapy shot, I guess we will have to show you some pics from the couple of suckers who injected themselves so they could attend this disaster or a show.

Another day at #CES pic.twitter.com/JLuN86eQwa

i’m not saying #ces is particularly empty, but one of their chartered shuttle buses rerouted to my destination rather than the designated drop off because all of their passenger was going there (as in me. it was just me.)

You know how absolutely rammed the Vegas Monorail is during #ces? Well, 2022, about that: pic.twitter.com/kmBqSI5lp9

This is #CES2022.?I?can see carpet in the central hall concourse. This is unheard of at 10am on opening day. pic.twitter.com/6y64Jqum1J

Shuttle bus to the #Sony #CES2022 press conference is pretty rammed too… (I’m the only one on it) pic.twitter.com/1OE5M8fzbM

For the vendors that did show up, most didn’t even bother to setup real booths or displays — another gigantic loss to the Las Vegas Tradeshow industry that depends on this income!

Sign of the times, LG has this huge space at CES, all based off QR codes, as a virtual exhibition. #vegas #CES #ces2022 pic.twitter.com/eypbmsjoWb

Very quiet here in the Central Hall. #CES2022 This was around noon on Wednesday. pic.twitter.com/afMoPmcTLz

Quiet morning on the strip in Las Vegas. @CES pic.twitter.com/e4h9pimQvA

Even before the show started, CES announced they would be shutting down a day early due to the complete drop off in attendance.

As CES completely collapses, our idiot governor is already making threats to shutdown businesses again over the so-called omnicron variant. Pretty soon the only thing Vegas will have left is the nightly shootings, stabbings and murders on the strip!