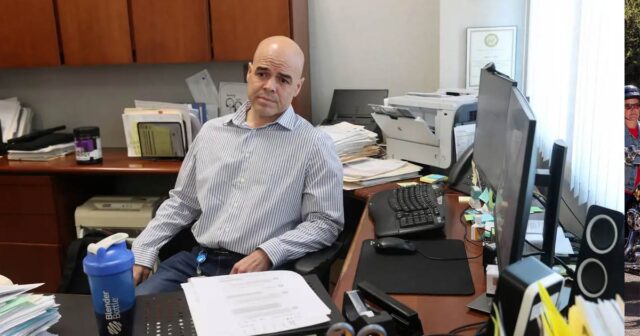 Las Vegas Metropolitan police have confirmed that they served a search warrant on Wednesday at the home of Democrat Clark County Public Administrator Robert Telles, in connection to the murder of Las Vegas Review-Journal investigative reporter Jeff German.

German was found dead on Saturday morning outside his northwest Las Vegas home located in the 7200 block of Bronze Circle, the Metropolitan Police Department reported. Police said he was fatally stabbed during an altercation on Friday, they later released video of the suspect.

(1/2) Captain Koren met with members of the media to provide an updated video of the suspect and a photo of the suspect vehicle in the homicide that took place on September 2.

The photos and the video can be viewed by clicking on the following link: https://t.co/qDutcTHHtF

Clark County Public Administrator Robert Telles was the subject of one of German’s recent investigations, highlighting corruption within the Clark County government. Telles lost his re-election bid in June’s primary after German’s story was published.

German was working on a follow-up story about Telles and corruption in the Clark County government the week he was killed. German had recently filed public records requests for emails and text messages between Telles and three other Clark County officials: Assistant Public Administrator Rita Reid, estate coordinator Roberta Lee-Kennett ( who German alleged was involved in an “inappropriate relationship” with Telles), and consultant Michael Murphy. Telles was secretly videotaped by employees meeting in the back seat of Lee-Kennett’s car.

In 2019, Telles was appointed to the Indigent Defense Services Board by Governor Steve Sisolak. We ran a report earlier in the year highlighting the corruption of this board and how the board and the Clark County Commission were siphoning 93 million taxpayer dollars a year, and funneling it to so-called homeless projects.

In May of this year, German wrote a piece accusing the Telles’ office of being “mired in turmoil and internal dissension” for two years because of allegations of emotional stress, bullying, and favoritism. After losing his primary bid in June, Telles posted on his re-election campaign website an “update” about what he said was a “fabricated scandal.”

Telles also tweeted out a number of angry tweets about the reporter. At the time, the rest of the Las Vegas media refused to report on the story because they typically cover for local democrats — unless of course they are forced to cover the story when police show up at the person’s house and serve a warrant.

Telles has a long history of campaigning with radical democrats like Elizabeth Warren, Steve Sisolak, Susie Lee and Aaron Ford. He was often used to push radical democrat propaganda in Clark County. Ironically, the guy who is now being investigated for murder often went on bizarre rants against republicans and gun owners, and often pushed for gun control.

After videos of the suspected killer and his vehicle were released by Las Vegas Police, Review-Journal reporters spotted Rob Telles in the driveway of his home with a vehicle matching the description. That vehicle was towed from the Telles property at about 12:50 p.m on Wednesday during the search of his home.

About 6 hours after @LVMPD began searching the home of @ClarkCountyNV official Rob Telles in connection w/ reporter Jeff German’s slaying, a red GMC matching the description of a vehicle police say was tied to the killing has been towed away. https://t.co/a2sQAQhPwV pic.twitter.com/vPX5IA4PL2

Ironically, the local corrupt Las Vegas media will now be forced to cover the story, despite ignoring this corruption for years and not saying a word when this guy’s buddy, Governor Steve Sisolak threatened reporters back in 2020.

The truth is, they don’t care about reporters when those reporter’s report actual facts or dare say anything negative about their democrat handlers! In fact, a number of the local reporters who are now running around talking about this “tragedy” are the same scumbags who attempted to dox our reporters and our web hosting company last year.

These are also the same so-called “journalists” who said nothing when the Clark County Commission started threatening bloggers and real journalists back in 2021 and passed a resolution to silence their reporting.