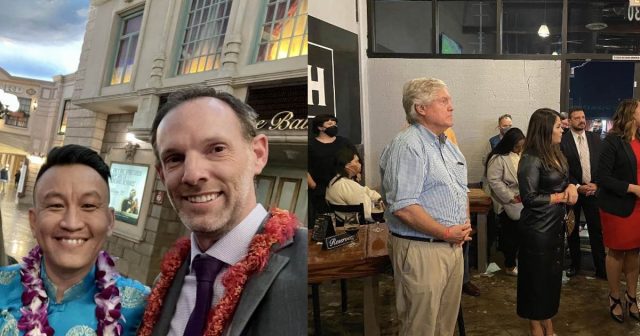 In the latest edition of “Rules for Thee”, two of the most corrupt Clark County Commissioners were caught yet again violating the very mask mandate that they imposed on the public.

Over the last week, both Justin “get the Vax” Jones – that’s seriously what the joker calls himself – and the degenerate drug addict, self-admitted socialist, Tick Segerblom were caught multiple times defying the mask mandate that they imposed on the people they swore to serve in Clark County.

Justin Jones, who loves to share his “pronouns” every chance he gets was caught inside Paris Hotel and Casino walking around and posing for pictures without the mask that he demands you wear.

He was then caught at a Democrat-associated Asian Community Development Council party maskless where everyone except the servants openly defied the mandate that they push on their own communities.

Congratulations again, Athar! We loved dancing with you! #inspirasian2021 https://t.co/BoleKETMIY

Apparently if you are pretending to stop “Asian Hate” and have powerful democrat friends in the Clark County government you are not hassled by Clark County for throwing maskless parties — oddly, the state and County sent their OSHA thugs and government officials to harass cowboys for going maskless at NFR, but seemed to be perfectly fine with allowing Justin and his minion to do the same thing without worry of persecution.

Last month Jones held a meeting where to show his power, he refused to wear a mask while demanding his constituents wear them at the same meeting.

This isn’t the first time we have caught good old Tick high off his ass, and maskless. In fact, as we reported months ago he routinely throws maskless pub-crawls and openly mocks his constituents as he boozes it up all night in Downtown Las Vegas.

Over the last week, Tick has been caught at multiple indoor parties without a mask, high off his ass!

And here is Tick at Servehzah Bottle Shop and Tap Room, a bar that literally screams in people’s faces if they enter without a mask, but routinely allows Tick and other local democrats to hang out without the complaince masks that they mandated everyone else has to wear.

Why are you still wearing masks? We’ve been telling you since this started, the very people that are imposing these mandates openly mock you among their elite friends.