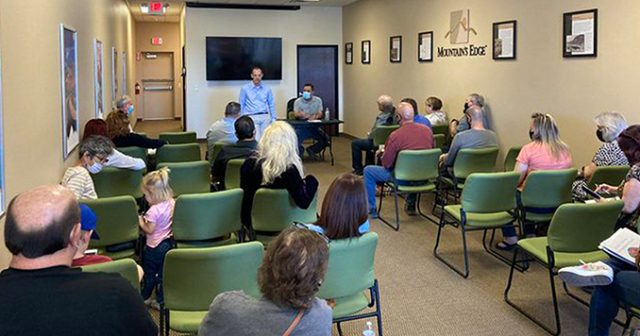 It’s beyond mind-boggling that so many people in Las Vegas are still allowing useless idiot politicians like Justin Jones and the Clark County Commissioners to dictate how they live their lives.

Back in July, the Clark County Commission at the direction of our tyrant Governor Steve Sisolak imposed yet another round of mask mandates on the public. Since that date, the Nevada Democrats who insist on controlling every aspect of your lives have proved time after time that they consider themselves above the rules, as they openly flaunt that they don’t have to obey the mandates they demand you follow.

This morning, at a “Conversations with the Commissioner” meeting, Clark County Commissioner Justin Jones, the same moron who voted to impose the mask mandate and ban free speech, refused entry to anyone who wasn’t wearing a mask. But as usual, the Commissioner himself believed he was above those pesky little mandates – those are for the serfs – he would conduct the meeting maskless!

Hey look, it's @ClarkCountyNV Commissioner Justin Jones not following mandatory mask guidelines he voted to impose on the serfs!

They don't hide it; they consider themselves above the rules!

Why are you still allowing useless people like this to dictate how you live your life? https://t.co/Sg7U8bAaa5

When will you wake up? If they don’t follow their own rules, WHY ARE YOU FOLLOWING THEM??

They are openly laughing at you, flaunting their power, and scheming behind the scenes to take away more of your freedoms.

Remember, just days after pushing mandatory vaccine mandates, Clark County Commissioner Tick Segerblom threw a giant birthday pub crawl for himself where virtually everyone in attendance was allowed to hang out, totally mask-free. And where were the so-called conservative activists that claim to be against these democrat tyrants, what were they doing…

Grinning like fucking idiots in photo-ops with the drug-addict commissioner!

Rules for thee but not for me…

And then we have Democrat Congresswoman Susan Lee and Senator Jacky Rosen who routinely hit the Las Vegas Strip to party at a mask-free Democrat Galas for the Billionaire’s they pretend to be against.

And here is Susie just last week, at another party for Billionaire’s, dancing the night away, mask-free at Resorts World — a Casino resort that segregates unvaxxed workers from the rest of the staff!