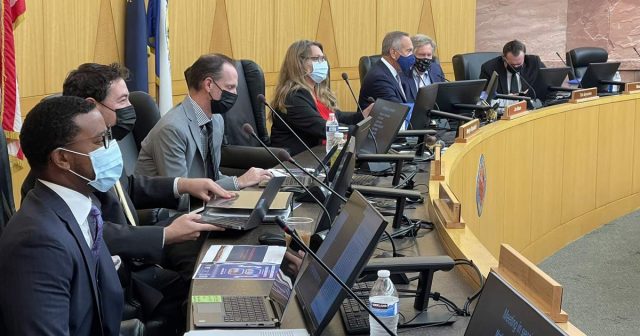 Keep in mind, this was such an emergency and a threat to public health that they actually postponed the “emergency” part of the meeting several times, including taking time so they could have an orchestra play live music to them.

Honored to have the talented Las #Vegas Youth Camerata Orchestra at today’s #ClarkCounty Commission meeting. The orchestra is 35 years old this year. Members continued to practice during #COVID19 and are glad to be back performing for people once again.@CommishTick @tsegerblom pic.twitter.com/tjE65E2HMh

Then, after they enjoyed the Orchestra, the meeting was again pushed back so Planned Parenthood could give a speech on the importance of abortion clinics and how they help the “LatinX” community!

After then delaying the meeting for a “leg stretching break”, two hours after the scheduled start time they finally got around to the so-called emergency portion of the meeting, where despite massive opposition from the public, they mandated that Clark County business owners have to force their unvaccinated and vaccinated employees to again strap on facemasks while at work.

As members of the public pleaded with Clark County Commissioners to not do this to our economy, they sat and played on their phones, ignoring anything the public had to say!

They have destroyed lives, they know they have killed small business & they think it’s funny!

Clark County Commissioners play on phone & text as public pleads for their livelihoods… this is heartbreaking, but her story reflects thousands of others!https://t.co/O2fPuoRD9S pic.twitter.com/GU7s27YYMH

The Gaming Control Board is expected to enforce the county’s mask mandate at casinos and other gaming establishments.

According to our sources at several local casinos, the decision was already made prior to the Clark County commission meeting. In fact, as we reported last week, Nevada Governor Steve Sisolak has been working behind the scenes with The Gaming Control Board and his henchmen on the Clark County Commission to reinstate the COVID mandates in a way where the public would not know it’s him, in an attempt to protect his chances of winning come election time. Good thing we got the internal Sands memo proving Sisolak is behind all of it!

Even before the emergency meeting started, our economy was already feeling the effects of our government’s attack on workers and small business owners. From exhibitor cancelations at upcoming tradeshows to business events who are now making contingency plans should the Las Vegas convention industry again face shut downs and capacity limits, the uncertainty created by the Sisolak administration and the Clark County commission is already having huge finacial reprucations.