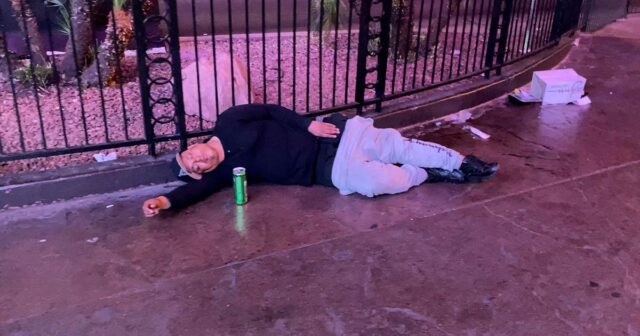 Grammy weekend in Las Vegas has shined a spotlight on just how far our once great city has fallen, as multiple celebrities and record companies have chosen to skip the event because they believe Las Vegas is not only unsafe, but as an insider told pagesix.com, Las Vegas has become a Gross Ass City!

Big labels have pulled out and canceled their normal after-parties, a number of celebrities have refused to even come to Las Vegas, and industry insiders say that they are having a hard time even pulling the event off because of a lack of workers and a serious decline in luxury services.

According to industry news, some celebrities refused to come to Vegas, and instead are throwing Grammy parties in Los Angles. According to PageSix, Steven Tyler will host a Grammy watch party at the Hollywood Palladium in Los Angeles, where Miley Cyrus will perform.

“The consensus is there’s not much going on and no one really wants to go to Vegas,” another industry insider told PageSix. Clive Davis canceled his annual star-studded pre-Grammy bash because of the unavailability of an appropriate venue. It seems nightclubs and meeting spaces are no longer able to guarantee they will even be open or able to serve larger events.

A city once known for Glitz and Glamour is now known for Violence, Shootings, and Homeless Meth Addicts preying on tourists.

Ironically, just a couple of days back our do-nothing governor who helped crash our economy was tweeting out bullshit messages about how Las Vegas is still the number one,  premier travel destination.

Nevada is known for the glitz and the glamour. Our hospitality industry is No. 1 and people come from around the world because we are the premier travel destination.

We are nothing without those who make this town run. Thank you! pic.twitter.com/EurzRCYTUz

Under this asshole’s leadership, and under our useless Sherriff Joe Lombardo, Las Vegas went from glitz and glamor to homeless addicts overdosing in the doorways of Las Vegas Casinos. We even have homeless addicts killing and stabbing people inside of billion-dollar resorts. The service is gone, replaced with scenes worse than things you would see if you booked your next trip in Iran.

After two years of democrats enforced shutdowns and a democrat war on our economy, Las Vegas is beyond broken. Restaurants and bars struggle to hire workers, as people have chosen to sit on their asses at home instead of contributing to society.  Under our glorious governor’s leadership, Nevada saw the highest rate of job loss found in any state nationwide, and triple the average rate found among the other forty-nine US states.

Thanks to his policies, we now have restaurants and businesses that are only open for a couple of hours a week, because they can’t find people who want to work.

But sadly, being unable to staff and provide visitors with the luxurious service and experience that was once synonymous with Las Vegas is just the tip of the iceberg. The fact is, Las Vegas is no longer a safe city – it’s become a third-world ghetto.

The new Las Vegas brought to you by @JoeLombardoNV and @GovSisolak when is @LVMPD going to remove these people from our streets? pic.twitter.com/pC8IXQ5RVq

Just this last week, we saw our media trying to make excuses and turn a homeless killer into some sort of victim. In reality, and as we exposed, another tourist was killed by a homeless meth addict who had already stabbed two other people in the last year and was let back out on the streets by a democrat-run system that favors criminals over hard-working people.

Last month, we had a mass-shooting inside an illegal, black-only nightclub. The shooter was a 9-time felon, with 82 prior arrests who was somehow let back out on the streets of Las Vegas to kill and create more chaos.

But these are just the latest in a long string of attacks inside and around Las Vegas Casinos. Over the last couple of months, we’ve had a shooting inside Downtown Grand, a mass shooting at an illegal blacks-only club, a murder inside the Rio, a shooting inside Bally’s, a housekeeper killed at Bally’s, a man beaten almost to death for not wearing a mask inside a Las Vegas store, a man stabbed by a homeless man inside the Paris Casino, a man shot 11 times by a homeless addict in Chinatown, and countless assaults inside Casinos and throughout Las Vegas.

Sadly, things are so bad here in Las Vegas under the state’s democrat leadership, that even our schools have turned into warzones with daily stabbings, riots, and beatings.