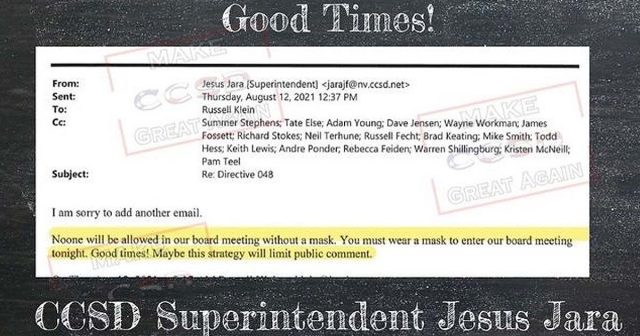 The email was sent to several other Superintendents and the head of Nevada Charter Schools. In the email, Jara says no one will be allowed in the meeting without a mask, and follows it up with “”Good times! Maybe this strategy will limit public comment.”

Of course this is nothing new, anyone who has followed our site has probably seen our videos of CCSD board members shutting down public comment on a regular basis, even using CCSD police to remove, intimidate and threaten parents with arrest for speaking out against CCSD policies.

Ironic that only certain people are allowed to talk at the Clark County School District Board meeting on “anti-racism” policy!

Board President Linda Cavazos not allowing a number of parents to speak and ordering police to remove them from the building. pic.twitter.com/qOXk7YyIFY

A number of folks taken out by police at request of school board. pic.twitter.com/HcJ0qnUoV5

CCSD relentless in using Masks as a Weapon to Control the Public!

CCSD has been absolutely relentless in their attempts to push mask and vaccine mandates on the public, going as far as posting soviet-style propaganda posters in public schools, designed to frighten our children into submission.

While the CCSD board of Trustees and our local media obsess over masks and vaccine mandates, our local Las Vegas schools have been plagued by another year of mass violence, rioting, and shootings.

Thankfully, the draconian “medical” mandates and the huge increase in violence and rioting within the Clark County School District have finally started to wake some parents up to the dangers of sending their children to public schools inside the Las Vegas valley. We recommend reading our article on how to homeschool you children in Las Vegas, and break free from the system!