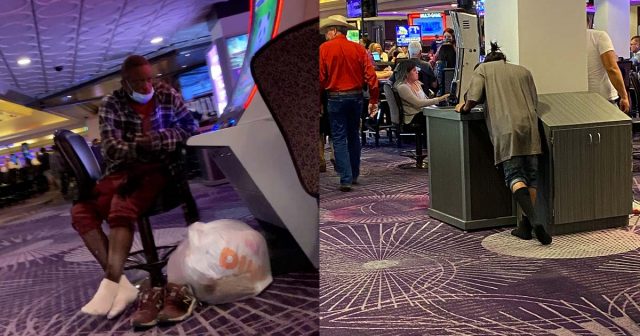 Over the last 14 months of the Sisolak shutdowns, we have covered the growing problem of violent drug addicted bums that have been allowed to set up camp inside Casino’s doorways along the Las Vegas Strip. Now, these same violent addicts are being allowed to roam through billion dollars casinos, harass gamblers, and setup camp on the Casino floor, completely unchallenged by Casino management.

It seems that social justice politics has been so infused into management’s culture, that they now allow homeless drug addicts to use casino floors as their personal living rooms. Over the last couple of days, we have witnessed homeless addicts dragging their trash through the casinos, digging through Casinos trash cans, and being allowed to sit for hours at slot machines in clothing that is literally soaked in feces and urine.

The smell is nauseating beyond belief, but apparently these disgusting bums are now more important than the tourists who came here to spend money – tourists who are now forced to inhale the smell of shit, piss, and months’ worth of body odor in order to gamble inside of a Las Vegas Strip Casino.

You can literally see @CaesarsEnt Casino floor management walk right by the bum that just crapped himself, without saying a single word or telling him the get the hell out!

3 weeks ago we were kicked out of same Harrahs location for having not wearing mask while eating pizza! pic.twitter.com/2vfmAeWGLR

As can be seen in the video above, we have personally witnessed these bums go unchallenged by Casinos security and Casino management inside of Harrah’s and the LINQ – ironically, just a couple of weeks ago we were literally kicked out of this same area for eating a pizza without having a fucking mask on.

Here is just a small fraction of what we’ve seen over the last couple of months in the same area. Why are we catering to these people? Is this really what Casino CEOs think will bring back tourists?