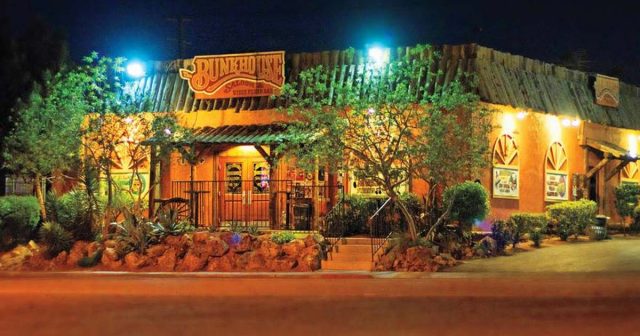 Today, the Bunkhouse Saloon, a downtown music venue once owned by local drug addict and cult leader Tony Hsieh, was set on fire by what sources say was homeless drug addicts that had been squatting in the building since it shuttered it’s doors at the beginning of the Steve Sisolak shutdowns.

According to witnesses, when firefighters arrived on scene, homeless people began pouring out of the building. Witnesses say the building was full of homeless squatters who looted the venue’s music and stage equipment, and have been using the closed down bar and kitchen as a drug/party house, without challenge from the city or law enforcement for over a year.

People in the neighborhood say the homeless squatters had full access to the Bunkhouse kitchen and bar, and empty liquor bottles and drug paraphernalia could be seen everywhere throughout the building. The building appeared to be looted by homeless addicts; PA consoles, drumkits, guitars and amps, and other music equipment had all been stolen from the building.

The future of the venue has been up in the air since the drug-induced death of Tony Hsieh late last year. Back in March 2020, COVID shutdowns dealt it another blow when The Bunkhouse posted a message on Facebook claiming the venue would be closed on a week-to-week basis, but would return “as things calm down.”

That never happened, and officials at DTP Companies, which operates the Bunkhouse have refused to talk about the shutdown, and have still not commented on why they allowed the building to be taken over by squatters and drug addicts.

The fire is just the latest tragedy in a long line of misfortunes surrounding Hsieh’s Downtown Project Scam, including numerous suicides, allegations of abuse, widespread drug use, and multiple bankruptcies.