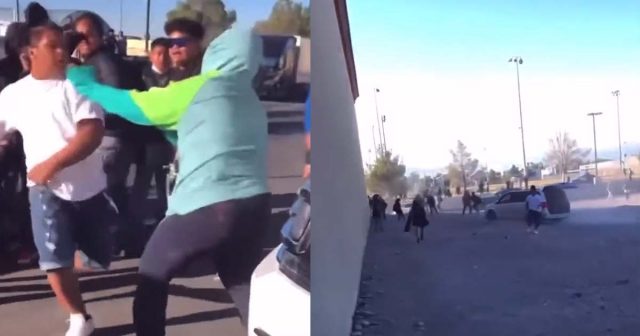 In the latest incident of mass violence at a CCSD school, after fighting school children at Silvestri Middle School, a crazed mother then attempted to plow down and kill a large group of middle school students.

Four kids suffered injuries when they were struck by the minivan in a parking lot near Silvestri Middle School Friday afternoon.

Las Vegas police spokesman Larry Hadfield said “there was some sort of altercation or fight” at approximately 2:20 p.m. in an alley at South Jack Leavitt Street and East LeBaron Avenue, near Maryland Parkway and Silverado Ranch Boulevard. A woman was involved in the altercation and, as she was driving away, her vehicle struck the youths, Hadfield said.

“She then left the area,” Hadfield said.

Another view of the crazy mother fighting and then attempting to kill kids from Silvestri Middle School with her van… pic.twitter.com/rCrybRQQCE

Apparently, even though the video shows the woman not only fighting the kids but intentionally plowing them down with her vehicle, the police say they are not sure if it was intentional.

Ron and Sherry Lawrence said their 14-year-old granddaughter was one of the kids hit in the chaos. They said she and other witnesses told them that a woman got into a fistfight with a boy in the alley shortly after a group of kids got out of Silvestri.

“She punched the kid in the face, got back in her car and ran over four other children, and left the scene,” Ron Lawrence said.

So far no arrests have been made.