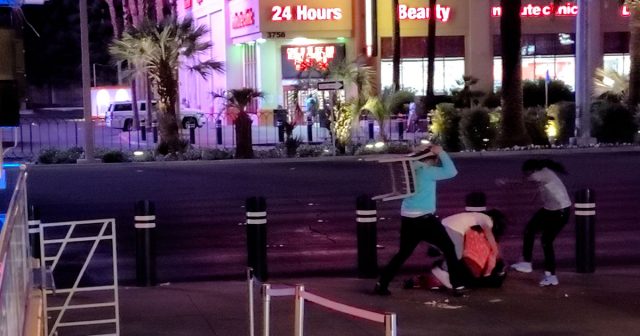 One of our sources sent us this disturbing video of a man being brutally beaten in what looked like a fight that started over a taco at Taco Papi on the Las Vegas Strip.

Here is the backup video on Twitter, since some fucking douchebags over at YouTube are trying to censor the truth on what is happening here in Las Vegas…

Welcome to the new Las Vegas Strip where ordering a taco can get you killed.

This is last night on the strip, guy was brutally beaten by group of thugs over a taco!

For over a year now, the Las Vegas Strip has seen an unprecedented amount of violence, largely in part to the criminal gangs that now own the Strip and attacks from mentally ill, homeless drug addicts that are allowed to setup camps in front of the casinos. Not once has Steve Sisolak, Dina Titus, or any other Nevada democrat held a press conference to address REAL-LIFE crimes, murders, fights and stabbings, and riots that occur almost nightly on the strip, on Fremont Street, and inside the Casinos!

But oddly, they have found time to talk about fake crimes in Chinatown and they’ve found time to put out proclamations that will help to fan the flames of violence within the city.