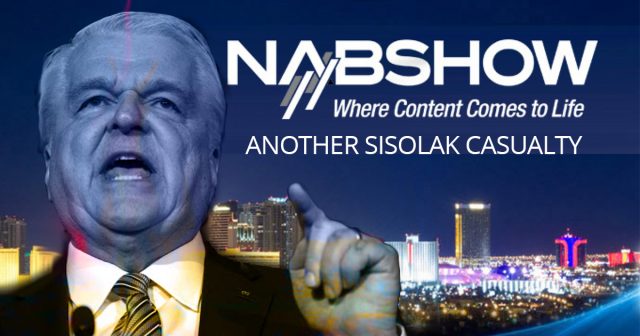 The Sisolak mandates have killed another huge revenue stream for the city of Las Vegas as the NAB Show announced they have canceled their annual convention which was set to take place October 9th through the 13th at the Las Vegas Convention Center.

Last month, NAB show officials announced that the convention would require all attendees to show proof of vaccination after our governor tried to extort conventions and event managers into banning unvaccinated in exchange for the ability to hold their shows without masks.

While the NAB show is blaming the cancellation on the “pandemic and surge of the Delta variant has presented unexpected and insurmountable challenges for our global community,” our sources at the NAB show tell us attendees and exhibitors essentially revolted over the vaccine passport mandate, and it was so bad that they were inundated with exhibitor cancellations and angry attendees to the point where they could no longer viably hold the show next month. We are told that less than 20% of the normal show attendance was expected.

NAB show officially stated in an email to past attendees this morning:

As we have always kept the best interest and safety of the industry as our priority, it has become apparent in the face of these challenges that we can no longer effectively host NAB Show or our co-located events, the Radio Show and Sales and Management Television Exchange, in person.

NAB Show is the premiere destination for the media and entertainment industry and we will not move forward with a show that delivers anything less than the excellence our community has come to expect and deserves from us.

While we are disappointed that we will not be together again in person next month, we look forward to converging at the 2022 NAB Show, April 23-27, 2022, to reignite our passion for our business and focus on a bright future ahead.

The cancellation is yet another gigantic economic loss for small business owners and hard-working Nevadans who depend on the trade show industry to stay afloat. NAB normally brings in over 110,000 attendees providing over $153 million of economic impact to the city of Las Vegas.

Just a couple weeks ago, The PBR Rodeo World Finals announced they were leaving Las Vegas and moving to Texas after the Governor made it impossible for them to continue holding their Rodeo in Las Vegas.