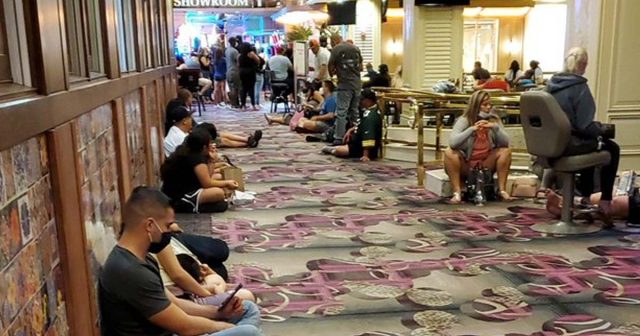 Las Vegas Metro has confirmed that a fight between 5-10 people on the sidewalk between The LINQ and Flamingo turned into another shooting after one of the participants pulled out a handgun and shot at least one person in the stomach.

After the shooting, guests trying to get back into their hotel rooms at the Flamingo were forced to sit on floors outside the hotel’s elevator corridor as the hotel went into lockdown mode while Metro searched for the suspects.

Flamingo Casino Hotel on lockdown as search for shooter continues… if this was your experience as a tourist, would you come back? Our Governor has killed our economy and destroyed Las Vegas, we need real leaders to step up! https://t.co/YqSs1an07a

The suspected shooter, 19-year-old Christian Miller, was arrested by the California Highway Patrol hours after fleeing back to California, according to CHP in Barstow, California. He is being held in a California jail pending extradition to Nevada.

The so-called “victim” was transported to UMC where he is listed in critical but stable condition.

Fifth Shooting this month: How much more can we take before normal tourists stop coming?

The shooting is the fifth this month on or near the strip, and the latest in a string of violent attacks throughout Las Vegas.

If you were a normal visitor in town during one of these events, would you ever come back?

Where are our leaders? Where are the Casino executives who have the political power to force our Governor to allow business visitors to come back to our city, and get rid of the filth that has filled the void since conventions were canceled?