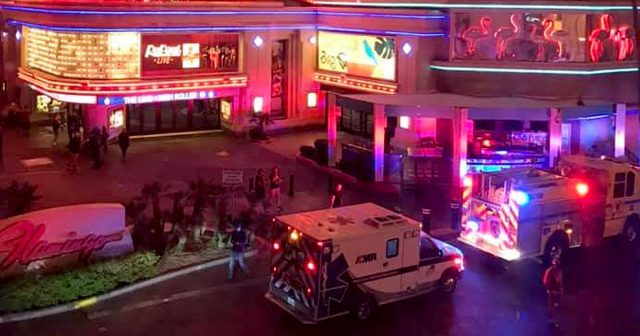 Around 2:20 AM, our city experienced yet another shooting on the Las Vegas Strip. Las Vegas Metro Police say one person was shot early Thursday morning on Las Vegas Boulevard north of Flamingo Road, near the Flamingo Hotel & Casino and the Cromwell.

The victim was rushed to the University Medical Center and is expected to survive. Las Vegas Metro hasn’t released any further details, but we have learned that the suspected shooter is still on the loose.

How many people need to be shot, stabbed or killed before Governor Sisolak says something about the violence?

For over a year now the Las Vegas Strip has seen unprecedented levels of violence. In fact, over the last ten days, we have seen numerous unreported attacks by homeless drug addicts, a stabbing at the Cosmopolitan, criminal bike gangs attacking tourists and security guards, criminals trashing our infrastructure, BLM fighting with tourists, and a man being brutally beaten by a pack of thugs over a taco!

Welcome to the new Las Vegas Strip where ordering a taco can get you killed.

This is last night on the strip, guy was brutally beaten by group of thugs over a taco!

We’ve actually got our local media on camera filming BLM violence that they later in the night reported as a peaceful protest!

Then BLM started screaming at people eating at Cabo Wabo & some tourists had enough! Local media filmed it, & then lied on their evening reports. These videos all came from BLMs live stream! Girl in purple dress is from @News3LV @FOX5Vegas can also be seen filming! pic.twitter.com/Imx1nYfNYp

As we’ve reported, if you are under 40 years of age you have a  323% higher risk of being murdered in Las Vegas than dying of the Coronavirus, yet our city, state, and county officials continue to ignore the record levels of violence, and instead push out democrat propaganda on fake crimes that are not happening in Chinatown.