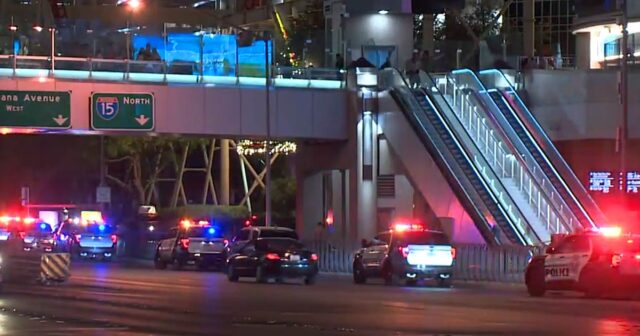 Last night, on a pedestrian bridge near the New York New York Casino, a man was stabbed in the chest and killed in what has become an almost nightly problem, thanks to our do-nothing leaders who have allowed the Las Vegas strip to slip into third-world status.

While details are limited, we have learned that the man was stabbed in the chest and died shortly later at a local hospital. Our sources say he was crossing the pedestrian bridge from the New York, New York Hotel & Casino to MGM Grand when he was assaulted and stabbed.

The suspect, now identified as 58-year old homeless drug addict Freddy Allen, has been arrested and charged with murder with a deadly weapon.

UPDATE: Stabbing at New York-New York Casino was by another homeless addict that Las Vegas Metro & @JoeLombardoNV failed to remove from the strip!!!

Another person dead because mentally ill “homeless” drug addicts have been allowed to takeover the strip!https://t.co/JwVB0xFItd pic.twitter.com/MGFpgpQt6q

Pedestrian Bridges are a Hot Spot for Trouble!

Unfortunately walking over the so-called pedestrian bridges is now like playing a game of Russian Roulette in Las Vegas. Homeless drug addicts, drug dealers and gangs have taken them over, turning them into mini-tent cities where they can shoot up and harass tourists for money. It’s not uncommon to be verbally assaulted and followed while walking across these bridges.

There are almost nightly assaults; last year we warned the public when a tourist was killed, after being followed and assaulted by one of the homeless addicts that have been allowed to take over these bridges.

While the local media ignores these stories, people who frequent the Las Vegas Strip know the pedestrian bridges have become a growing problem. From pimps and drug dealers trying to hard sell you out in the open to homeless addicts shooting up, shitting themselves, and screaming at you while you pass, crossing these bridges can be like playing a game of Russian Roulette.

Dereliction of Duty: Public Officials Ignore the Dangers they are Putting Tourists In!

For over two years now we have reported on the out-of-control gang violence and attacks on tourists at the hands of the homeless drug addicts that have taken over the Las Vegas Strip – the local media, Metro, Casino Security, and Casino Executives have all ignored the problem.

Entire sections of the Las Vegas Strip have now become what we would call NO-GO Zones — and on weekdays, the police are almost nowhere to be found. From the addicts and criminal street gangs that stalk, rob and beat tourists outside Planet Hollywood to Casino properties like Casino Royale, Harrah’s, and the LINQ which now allow homeless drug addicts to openly stalk their victims inside of billion-dollar resorts, it’s beyond sad what has happened to our once great city.

A Thursday Night on the Las Vegas Strip…

Billion Dollar Strip Casinos have been taken over by Homeless Drug Addicts.

This is your new Vegas thanks to @GovSisolak and @JoeLombardoNV who have allowed our once great city to be turned into a third-world ghetto! pic.twitter.com/Ptyqv2sT1n

Entire sections of the Las Vegas Strip are being claimed by street gangs, drug pushers, and homeless addicts as our city, county, and state leaders have left tourists vulnerable to attacks, robberies, and assaults.