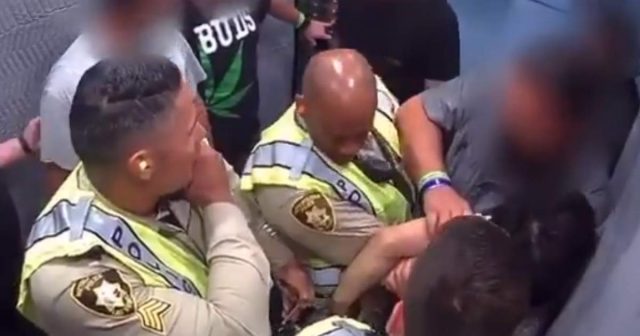 Two officers were injured over the weekend, after being shot with a Las Vegas Metropolitan Police officer’s own gun, while they attempted to take an suspect into custody inside an EDM concert at Allegiant Stadium.

According to police, at approximately 1:33 a.m. LVMPD special events officers attempted to arrest Lyndon Truong, 28, after witnessing the man assault a stadium security guard. After chasing the man, police attempted to arrest him but the suspect was not compliant, and the officers struggled to get handcuffs on his wrists. Our sources tell us that like many of the attendees at the Illenium “concert” the guy appeared to be high out of his mind on a number of drugs.

While attempting to take Truong to a security holding cell, Truong slipped a finger into one of the officers holster and fired a single shot, hitting one officer in the leg and sending shrapnel into another officer. Both officers are expected to make a full recovery.

Troung is currently hospitalized at UMC — we are hearing due to drug related issues — he faces the following charges, but has yet to appear in court “due to medical reasons”:

According to Metro Assistant Sheriff Laz Chavez, the officer’s firearm was secured in a holster on the officer’s duty belt; during a press conference Chavez seemed to blame the incident on the holster saying, “It could very well be an equipment issue. I spent this morning looking at a number of different holsters, and I have the same concerns as probably all of you in this room have.” … “We’re going to look at that and determine whether to get rid of certain holsters and look into training.”

An Equipment issue? How about an issue with police being afraid to do their job correctly?

While yes, having the proper holster should definitely be a concern, why isn’t anyone asking if the bigger issue here is either poor training or police being afraid to apply the proper amount of force when arresting a subject out of fear they will be the next officer persecuted by the media?

As we’ve talked about in the past, we have literally seen Las Vegas Metro police officers being chased away from their posts on the Las Vegas Strip by thugs screaming fuck the police in their faces.

Just watched group of 5-6 black people screaming “fuck you white pieces of shit” at diners on the strip… then walk up to cops screaming fuck the police and literally had 4 metro cops flee! When cops start running away, do you really think you are safe on the strip? pic.twitter.com/6kE1RYaTgg

If you want to know why we have a crime problem, look no further than the local media and local politicians that both celebrate thugs and trash our officers for attempting to do their job!