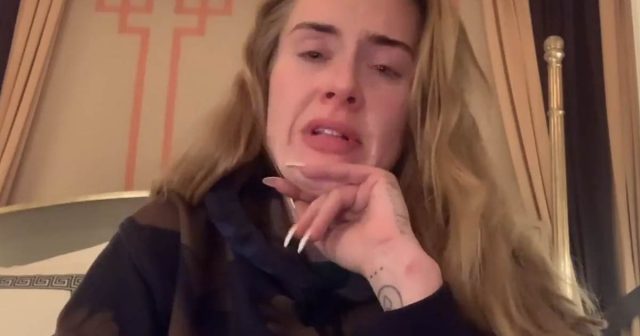 It seems these days you can blame COVID for just about anything, including scamming fans into coming to Las Vegas, spending millions upon millions of dollars that you will never get back, and standing outside a venue wondering what happened to the concert that you were promised.

Yesterday, some singer who he had never heard of until seeing masses of brainwashed fans crying in Caesars Palace, apparently canceled her residency just hours before she was supposed to go on stage – and like usual the media says COVID is to blame.  But that seems odd since this wacky singer refused to even show up unless all unvaccinated people were banned from being anywhere near her.

To attend the show you had to be vaccinated, and show proof of a negative test 24 hours before the show. Backup performers and staff had to be vaccinated, show negative tests, and have their masks on when the DIVA entered. Yet, Adele is claiming that she has to cancel 24 shows between January 21, 2022 through April 16, 2022, due to half the cast being sick with COVID?

All dates will be rescheduled
More info coming soon
? pic.twitter.com/k0A4lXhW5l

How does Caesars get away with Stealing Millions from Fans?

Our sources tell us that Caesars Entertainment knew weeks ago that these shows were never going to happen. The so-called superstar Adele seemed to be in the middle of some manic episode, and there were huge doubts that she was ever going to go on stage during the middle of the so-called pandemic. Yet, tickets were sold ($100 for nosebleeds and as much as $5,000 for front row seats with VIP packages.); shows sold out, and tickets on the secondary markets were going for as much as $40,000 for a seat.

And now, according to Stub Hub, since Adele didn’t technically cancel the show, just “postponed” it due to COVID, fans who bought the tickets are screwed – they can’t resell them, and they can’t get refunded. And for those who scheduled trips to Las Vegas, specifically for the concert series, those people are not only out the cost of the tickets but hotel and flight costs as well.

If Adele ever decides to reschedule, ticket holders will still be unable to get a refund and will have to sell the tickets through Stub Hub. The Ticket seller said, If purchases can’t make it on those dates, they’ll be allowed to re-sell the tickets to others. Stub Hub will waive all fees then. But there are no refunds because Adele “rescheduled.”

The shows have generated more than $50 million in revenue for Caesars.

@Adele @CaesarsPalace #Adele #AdeleVegas @TMZ When Adele cancels you have your own concert in front of the theater- pic.twitter.com/HmRl44LcBb

Of course we live in some backwards ass bizarro world now, where half of these brainwashed sheep stand outside the concert venue weeping and singing Adele songs in support of the pop superstar, while she sits upstairs probably laughing at these morons.

I mean if she cared, couldn’t she walk her happy ass downstairs and at least say sorry, maybe sing them a song for their troubles? Of course not, then she may have to walk by one of us unclean, unvaxxed heathens on her way!

Of course paid Casino Shills like Las Vegas Locally and Scott Roeben of Vital Vegas — who was a paid Caesars Entertainment Blogger and still gets comps and cash from casino executives, despite pretending to be independent — has already started making excuses for the Casino, saying it was the right thing to cancel.

The paid propagandist said “Your fans aren’t going anywhere. And people like us, who weren’t really fans, are fans now. We’re rooting for you and you could get onto that stage and play a kazoo, we’re still going to give you a standing ovation, because you have exhibited something rare. Pure heart.”

Scott (Vital Vegas), who claims to have “broke the story of her residency” — easy to do when you are paid by the casino to run the story — is now pushing the Caesars PR propaganda that it’s all COVID’s fault. Roeben took to his website, writing a love letter of sorts to the singer, saying “The pandemic sucks, and it took a lot of guts to push back these shows. It means you give a damn about giving people an incredible, uncompromising experience.”

WHAT A FUCKING MORON!