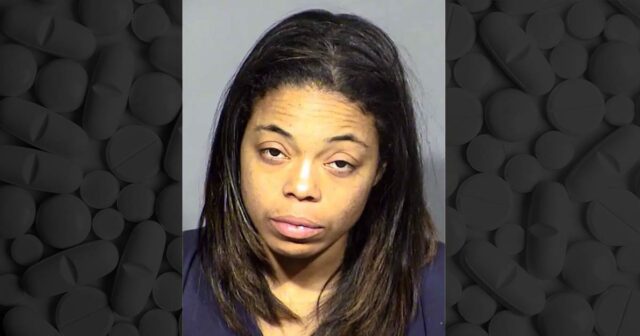 The Las Vegas Metropolitan Police Department says a four-year-old child was found dead on Tuesday at the Orleans Hotel and Casino. Law enforcement authorities believe the child ingested a fentanyl-laced pill while left alone in a hotel room.

According to the arrest report, Las Vegas Metropolitan Police responded to The Orleans Hotel, 4500 W. Tropicana Ave., around 3:30 a.m. on Tuesday after receiving a call that the Clark County Fire Department was requesting assistance for a small child who was unresponsive. The boy was pronounced dead at the scene.

The boys so-called mother, Amber Mitchell was arrested and booked on three counts of child abuse and one count of possession with intent to sell drugs, according to jail records. Police say Mitchell went downstairs to play poker and left her children alone in her hotel room.

Mitchell told police that when she returned to the room around 1 a.m., she found her youngest son looking “really groggy, as though he was still sleepy.” Police say the mother said she then noticed that the child’s eyes were constricted and thought he may have taken one of the pills.

Despite suspecting he may have got into her pills, pills that apparently contained fentanyl, she decided to go back down to the casino and gamble. Two hours later, when she went to “check on them” again, the youngest boy had blood coming out of his mouth.

The mother of the year told Las Vegas Metropolitan Police that a man she met at another casino came to her room earlier in the night and laid out ten pills, pills he believed to be Oxy’s”, for her to take a picture of and potentially sell.

Clark County Chief Deputy District Attorney Tim Fattig said, “She was in possession of fentanyl pills because she was attempted to sell them,” … “She failed to secure them in her hotel room leaving them out in the bathroom counter.”

When asked why she did not call 911 or seek medical attention for her child, according to the report, she stated that she is “just a mother, not a doctor. I didn’t know Oxy could kill him; I don’t know about fentanyl.”

According to our sources, Mitchell was well known to authorities and the Nevada’s Division of Child and Family Services. In fact, a report was filed on her back in 2021 that alleged neglect, but authorities failed to do anything to stop this monster — it appears political correctness once again stopped authorities from doing their job!

Even after killing her kid with her neglect, she is still attempting to get special treatment! Clark County Public Defender Josie Bayudan requested high-level electronic monitoring for Mitchell with no monetary condition. The public defender claimed she had not money and was receiving public assistance, specifically $700 for food, and claimed Mitchell could not afford bail.

Luckily Las Vegas Justice Court Judge Elana Graham seemed to have a shred of common sense and pointed out that Mitchell was staying in a hotel and gambling. Judge Graham set bail for Mitchell at $200,000. Mitchell refused to appear in the courtroom.

While Meth is currently the largest narcotic killer in Clark County, Fentanyl is quickly catching up. According to the Southern Nevada Health District, in 2021, 226 people in Clark County died from a fentanyl overdose. A large part of the problem is low-level addicts are unsuspectingly buying pills from people like this loser mother, believing they are things like Oxycodone or Xanax, when they are actually getting fentanyl.

Earlier this year, Las Vegas police launched a campaign on the dangers of fentanyl following a spike in overdoses in Southern Nevada. Sadly, the video featured very young children because authorities say they are more likely to buy counterfeit pills, thinking it is something like Xanax, from local dealers.

According to a news release from LVMPD earlier this year, fentanyl is showing up in drugs and pills that are coming across the border from Mexico. Las Vegas Police say local teenagers think they’re taking a prescription pill. However, the Drug Enforcement Administration (DEA) says 40% of counterfeit pills that come into the country contain deadly amounts of fentanyl.

Police say they are seeing a growing number of middle school children trying fentanyl, “not realizing the deadly consequences.”

The number of deaths connected to #fentanyl are alarming. Clark County lost 16 kids under 18 to fentanyl overdoses between 2020 and 2021. As summer approaches, we are pleading with the community to take this seriously.
Details: https://t.co/fuvX0zc1s2 pic.twitter.com/BBGpYnghg8