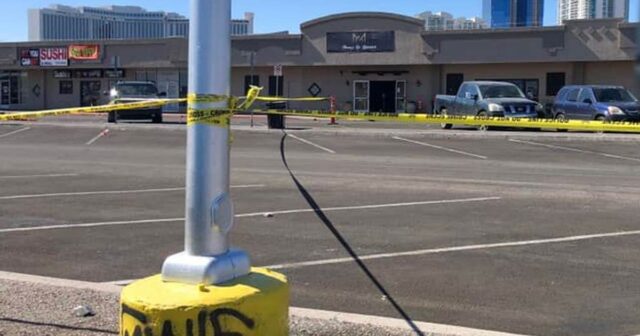 According to Las Vegas Metropolitan Police, 14 people were shot around 3:15 AM at Manny’s Glo Ultra Lounge at 953 E Sahara Ave in Las Vegas.

One man, we are being told a black man, has been pronounced dead, and two others remain in critical condition. Police Police say the investigation is in its early stages but preliminary information indicated there was a “party” during which two people got into an altercation and exchanged gunfire, striking multiple people.

Detectives are investigating a homicide which occurred this morning near Sahara and Maryland Parkway. Click here for more: https://t.co/CiCdol0SfW pic.twitter.com/2nUGWVTBih

Koren told reporters no arrests were made and no suspect descriptions were immediately available, which shouldn’t be a shocker since the entire area is run by criminals and gangs. While the media and the police are refusing to tell the public what the suspects look like, we are being told by our sources that almost everyone involved was black, the 1 reported dead was black and gang associated, and the shooters were also black.

On social media, people who frequent the so-called lounge and area known as the Commercial Center District often refer to it as GANGLAND! The night of the shooting, a party called Freaky Fridays featuring DJ Kelly J and a local rapper named Money Manny Vegas was scheduled.

To anyone that knows the area, it really shouldn’t be a shocker that this happened. While the police and the local media may want to play dumb, the area known as the Commercial Center District around the 900 East block of Sahara should have been demolished years ago – it’s basically an enclosed mini-shopping district that has been taken over by gangs, human traffickers, prostitutes and criminals.

Most of the businesses are either running illegal operations or helping support the prostitutes that use the lounges, bars, whore houses, and sex clubs in the district to solicit tourists.

The entire area is a hot spot for prostitution, human trafficking, drug deals, and sex clubs, but the City of Las Vegas and Sheriff Joe Lombardo turn a blind eye to the activities, even allowing so-called businesses in the district to stay open throughout the Sisolak shutdowns. Oddly, while governor Sisolak and his buddy Sheriff Joe Lombardo send saturation patrols to Chinatown, pretending there is some epidemic of Asian hate happening, this area is allowed to devolve into one of the most dangerous places in our city.